When you hear the word “owl,” what comes to mind? Do you picture a mysterious big-eyed bird of the night? Maybe you think about a symbol of wisdom or a character in books. Clearly, people are fascinated by owls. The best way to understand them is to learn as much as possible about them.

Owls, along with hawks, eagles, and falcons, are birds of prey, or raptors—birds that hunt other animals for food. As you probably already know, one thing that’s special about owls is that most of them do their hunting at night. Their special soft feathers mean they can fly silently. Their big eyes help them see in the dark. Owls have especially good hearing, too. Their ear openings are hidden under thick feathers, but they are larger than those of other birds. Even owls’ saucer-shaped faces help them find prey by funneling sounds to those extra-big ear openings. 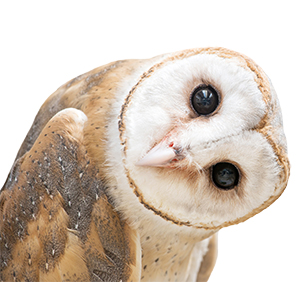 Owls are able to turn their heads as much as 270 degrees, but not a full 360 degrees. They can also turn their heads almost upside-down. This is possible because of the bone structure of the owl’s neck and the arteries that feed blood to the brain. Owls have more vertebrae—the connected bones that form an animal’s backbone—than any other animal.

Owls live almost all over the world. They hunt on the frozen tundra of the Arctic and in the deep forests of the tropics. Most owls are mainly brown or a mixture of brown and gray to blend in with the trees or, in the case of the Burrowing Owl, to match the color of the ground. But the Snowy Owl, which often hunts in the daytime, is an exception. Its white feathers are perfect camouflage against the snow-covered landscape in the northern regions where it lives.

Owls eat a variety of things, from snakes and frogs to skunks and rabbits to grasshoppers and other insects. Mice, shrews (small, molelike rodents), and voles (small, mouselike rodents) are a very popular prey. Imagine eating your own weight in mice every evening! Barn Owls polish off one-and-a-half times their weight in prey nightly, and all other owl species have similar huge appetites. That’s why farmers are happy to have owls around, because those rodents can do a lot of damage to crops and animal feed.

Owl Prowl takes you on an adventure to learn more about owls. Begin by reading the Audubon Adventures magazine you see in the column on the right. You’ll meet some of the owls that live in the United States and see how an owl catches its prey. You’ll also discover what an owl pellet is and learn to sort out some misinformation about owls. After you’ve read the magazine, be sure to explore the other Owl Prowl features available on this website. Have fun exploring the fascinating world of owls!